6 Days in Latvia: An African’s First Experience of Europe

I am a guy who loves travelling so much but it’s quite ironic that by this time last year, I had only visited one country apart from my motherland (Malawi) and that is our neighbouring country, Zambia. However, I have been so lucky this year to visit Zimbabwe and Latvia all courtesy of the International Music Council (IMC) through its initiative; the African Music Development Programme (AMDP).

The IMC organised the inaugural Impact Music Conference in Harare, Zimbabwe and I was privileged to be one of the two young, African aspiring creative entrepreneurs selected to pitch at the conference. I was very excited to hear that I would travel by air – prior to this trip, I had never been inside an aero plane apart from the little experience we get from movies. It was really amazing to see the other side of Africa and we had a successful conference.

A few weeks after the Zimbabwe conference, I came across an announcement on the AMDP facebook page offering an opportunity for one young African creative entrepreneur to make a presentation at the 5th European Forum on Music in Latvia themed “Access to Music is Digital?” Thinking about travelling to Europe excited me and without hesitation, I submitted my application. The rest is history! My application was successful and travel preparations began.

Getting a visa for Latvia was the biggest hurdle in the preparations. Malawi does not have diplomatic ties with Latvia so I had to travel to another country to get the required Schengen visa. That meant travelling to South Africa to apply for the visa at the Latvian Consulate and that was not a viable option at that moment. Lucky enough, the Embassy of Sweden in Zambia made reservations for me and I was allowed to apply at their embassy. That meant travelling on road for over a thousand kilometers from Blantyre (Malawi) to Lusaka (Zambia). And all this was worth it as I was granted a one year Schengen visa afterwards.

9th June 2015, the long journey finally begun. This was my first time to travel outside Africa and I was excited to experience life on another continent. I was mesmerized with the infrastructure in Addis Ababa, Ethiopia as we made our first stop. It was my first time in East Africa as well. Arriving in Frankfurt, Germany the next day gave me uncontrollable chills down my spine. It was totally a different world from where I come from. Everything was different – a different planet altogether. At this moment, it really hit me that we had arrived in Europe.

I arrived in Riga, Latvia a few hours later and the experience I had at Frankfurt airport continued. I was amazed with how organised the people are. From the way taxi drivers carry themselves and the reception at the hotel, everything was like a dream. Latvia is so rich in culture and the people appreciate music so much. I was lucky that my hotel was located in Old Town Riga, which is the centre of culture and tourist attraction in Riga. Being the culture enthusiast that I am, it all worked perfectly!

The day had finally arrived, Thursday, 11th June 2015 and the 5th European Forum on Music had begun. The opening ceremony was thrilling! We were treated to an evening with Latvian traditional music and dances performed by students and graduates of the Ethnomusicology class of the Jazeps Vitols Latvian Academy of Music (JVLMA).  The opening ceremony made me feel at home.

The following day presentations and panel discussions would commence at JVLMA. I also made my presentation on this day centred on the current status of digital music sales in Africa and Kwacha Box – a digital platform I am currently developing which would help artists and record labels make a little money in this digital era. I was very happy that a lot of the participants were interested to find out more on the scope digital sales in Malawi and Africa at large as well the Kwacha Box project.

Next day we travelled to Cesis, a small city in Latvia where the conference continued. Like the previous day, this day was full of lessons. I began to appreciate the importance of music education (something we do not really have in Malawi) and this started giving me thoughts of starting a music information centre in my country. The highlight of this day for me was watching an orchestra performing live in a newly opened state of the art concert hall. This was the first time I watched an orchestra, apart from movies of course and I also appreciated the concert hall – something we do not have yet in my country. We also had a medieval feast at the Cesis Medieval Castle Gardens which was a very refreshing session and also initiated more dialogue with delegates from the IMC and EMC (European Music Council).

Sunday, 14th June 2015, I was privileged to attend the EMC Annual Meeting and this was also the day to say goodbye to the new friends I made in the course of the conference. As the delegates started leaving one after the other, I had my own city tour of Riga as my flight was scheduled for Monday.

I arrived back home two days later jet-lagged but very much invigorated with the knowledge and friendships I got in Europe. This trip changed the way I view the world and rejuvenated the passion I have for music. After my experience in Europe, my life shall definitely never be the same again! 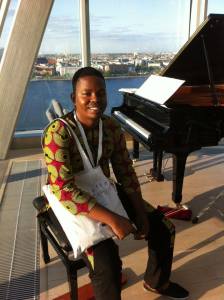 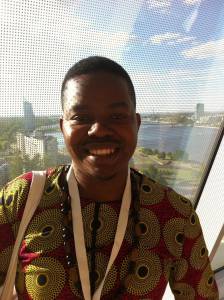 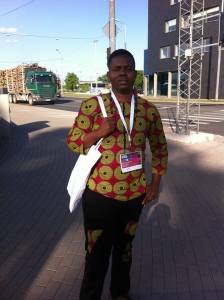 Students exchange between universities in Kenya and Uganda